You are here: Inicio

In Peru, there are 5 of the 6 species that exist in the world. They are also captured by longline and gillnet fishery. These species have been reported in the bycatch: Leatherback turtle (Dermochelys coriacea), Green Sea Turtle (Chelonia mydas agassizii), Hawksbill (Eretmochelys imbricata), Olive Ridley Turtle (Lepidochelis olivacea) and the Loggerhead Turtle (Caretta caretta).

Some species of dolphins are also affected by the catch like the tannins or porpoise (Phocoena spinipinnis) – which are only distributed in the seas of Peru, Chile and Argentina – the Dusky Dolphin (Lagenorhynchus obscurus), the Bottlenose Dolphin (Tursiops truncatus), and the Long-beaked Common Dolphin (Delphinus capensis).

Thanks to the support of: 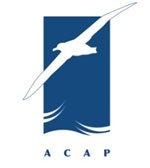 The Project Evaluation of the distribution abundance and bycatch of albatrosses and petrels is developed by: